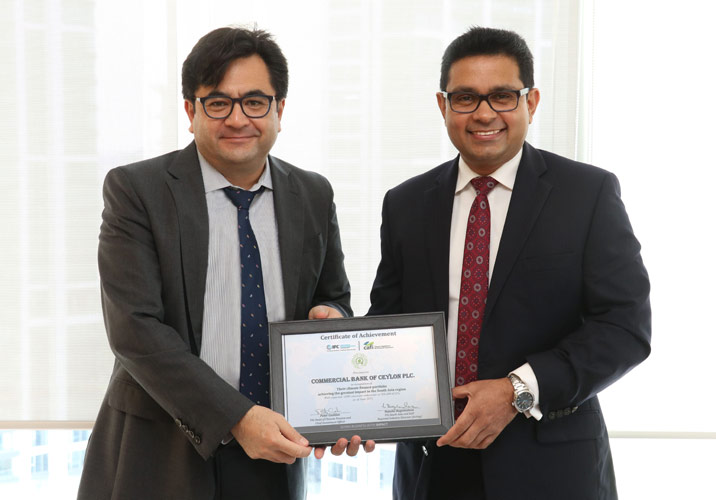 Sri Lanka’s first fully carbon neutral Bank, the Commercial Bank of Ceylon has emerged as one of the top banks – and the only Sri Lankan bank –  to win two Climate Assessment for Financial Institutions (CAFI) awards from the International Finance Corporation (IFC).

These ground-breaking climate impact awards were conferred on Commercial Bank in acknowledgement of the Bank’s estimated greenhouse gas (GHG) reduction and for completing the highest number of climate finance transactions in South Asia in 2020.

The awards were presented for the first time by the IFC to recognise financial institutions that outperform their climate finance targets.

Commercial Bank’s climate finance achievement included the reduction of 208,400 tonnes of carbon dioxide equivalent (tCO2e) of greenhouse gas which is equivalent to removing more than 40,000 cars from the roads, and the disbursement of 416 green loans or climate finance transactions that meet the CAFI criteria.

IFC selected Commercial Bank upon analysing data regarding GHG reductions and climate financing submitted by its clients in the South Asia region using CAFI - a digital, web-based platform introduced by IFC to help banks and other financial institutions assess climate eligibility and to measure the development impact of the projects they finance. Commenting on CBC’s accolade, IFC South Asia Regional Director Hector Gomez Ang said: “The private sector should see climate change as an opportunity to deliver innovative solutions that are commercially viable and help countries transform their economies. Commercial Bank of Ceylon is a longstanding partner of IFC in Sri Lanka. We are proud to see the results and the impact of CBC’s green investments across the country, helping Sri Lanka transition towards a more sustainable and a resilient future.”

Commercial Bank uploads data pertaining to its green projects and green loans and leases granted to the CAFI platform as a practice. Using CAFI, the Bank is able to verify whether or not a project meets internationally agreed-upon criteria for climate finance.

Commenting on the Bank’s remarkable achievement, Commercial Bank Managing Director and Group CEO Mr S. Renganathan said: “We are truly delighted to win these awards because climate finance and carbon footprint reduction have always been priority areas for us. These awards position Commercial Bank as the predominant bank in climate financing and environmental consciousness in the South Asia region. They also affirm that as an institution we continue to strive for carbon footprint reduction even after achieving carbon-neutrality. Not only are we conscientiously reducing GHG emissions in our operations, but by financing sustainable and climate-impactful ventures, we are also encouraging other individuals and corporate entities to join in our march towards a greener future.”

Commercial Bank’s multifaceted green initiatives include lending to support sustainable and green operations, migrating customers to paperless banking, improving efficiency in the use of energy, water and other resources in its own operations and supporting community initiatives that help conserve habitats and the environment.

IFC introduced the CAFI Climate Impact Awards this year to recognise, by region, the financial institutions that have achieved the largest disbursements, largest expected GHG reductions, highest number of climate finance transactions booked, and finally, those that exceeded their transaction target by the largest percentage. IFC said it plans to present these awards annually.

Commercial Bank is the first Sri Lankan bank to be listed among the Top 1000 Banks of the World and the only Sri Lankan bank to be so listed for 11 years consecutively. The Bank operates a network of 268 branches and 931 automated machines in Sri Lanka. Commercial Bank is the largest lender to Sri Lanka’s SME sector and is a leader in digital innovation in the country’s Banking sector.  Its overseas operations encompass Bangladesh, where the Bank operates 19 outlets; Myanmar, where it has a Microfinance company in Nay Pyi Taw; and the Maldives, where the Bank has a fully-fledged Tier I Bank with a majority stake.