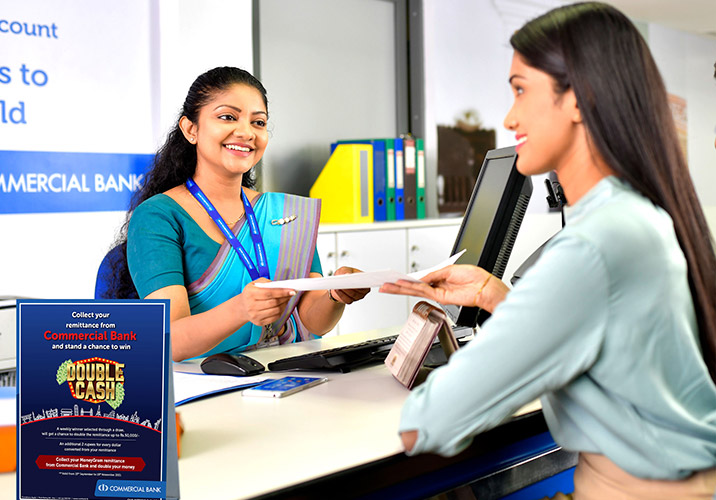 Recipients of remittances via Western Union and MoneyGram stand a chance of doubling their funds courtesy of Commercial Bank of Ceylon under an exciting new promotion launched by the Bank with the two global money transfer services.

A total of up to Rs 800,000 in prize money can be shared by 16 lucky Commercial Bank remittance customers to be chosen at weekly draws over the course of two months under the ‘Double Cash’ promotion, the Bank said.

Open to anyone collecting a Western Union or MoneyGram remittance at a Commercial Bank branch, the promotion will select one winner from each service once a week to double the value of the remittance received, subject to a maximum of Rs 50,000 in prize money per winner.

The promotion will run until 15th November 2021, the Bank said. The winners chosen at each weekly draw will have their prize money credited on the same day to their accounts, if they already have an account with Commercial Bank. Winners who are not accountholders will receive their winnings as soon as they open a Commercial Bank Account and submit the details to their branches.

Additionally, those who receive direct remittances via Commercial Bank will receive Rs 2 over the prevailing rate of exchange on the conversion of every United States Dollar or the equivalent in the currency they receive, the Bank said.

The ‘Double Cash’ promotion is designed to encourage beneficiaries receiving money from overseas via Western Union and MoneyGram to use and bank with Commercial Bank, one of the most active players in Sri Lanka in the field of remittances. One of the Bank’s key strengths is its island-wide network of 268 branches, many of which remain open on public, bank and mercantile holidays, and its network of 931 ATMs, which is the largest automated cash dispensing system owned by a single private bank in Sri Lanka. Recipients of remittances sent to the Bank enjoy many benefits such Holiday Banking Centres and supermarket counters, a dedicated customer support call centre for remittances and SMS alerts facilities once the remittance is received and is ready to be paid out.

Commercial Bank is Sri Lanka’s first fully carbon neutral bank, the first Sri Lankan bank to be listed among the Top 1000 Banks of the World and the only Sri Lankan bank to be so listed for 11 years consecutively. The Bank’s overseas operations encompass Bangladesh, where the Bank operates 19 outlets; Myanmar, where it has a Microfinance company in Nay Pyi Taw; and the Maldives, where the Bank has a fully-fledged Tier I Bank with a majority stake.