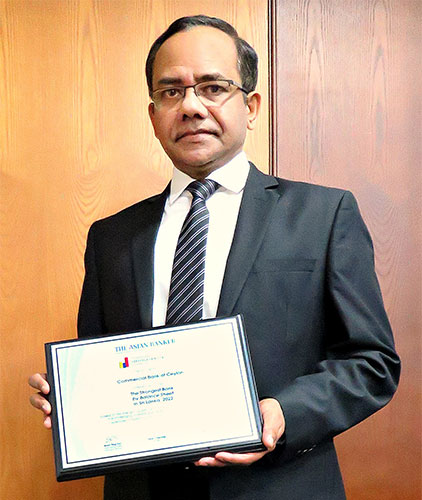 The Commercial Bank of Ceylon has been proclaimed the ‘Strongest Bank in Sri Lanka’ in 2022 by Asian Banker, a leading platform in the Banking and Financial Services industry.

The Bank received this ranking based on the strength of its balance sheet, following a rigorous quantitative assessment of the financial performance of banks in the Asia Pacific region. The evaluation comprised of six crucial indicators weighted by their relative importance. These included the scale of the Bank’s assets relative to gross domestic product (GDP), balance sheet growth of net loans and deposits, risk management of the bank’s operations, profitability and sustainability, strength and credibility of loans disbursed, and liquidity of assets to meet adverse events requiring cash outflow.

Commenting on being ranked among the strongest banks in the region, Commercial Bank Managing Director/CEO Mr Sanath Manatunge said: “Commercial Bank has met every challenge that has come its way with sharpened focus on its mission and on achieving an equitable balance between the expectations of all stakeholders. The current local and global conditions do impact on balance sheet, but we have retained our inherent strengths and soundness, which has been recognised by the Asian Banker. This affirmation of our position as the strongest bank in Sri Lanka is most encouraging.”

The Asian Banker has been publishing its annual ranking of the Strongest Banks in the Asia Pacific region on the basis of balance sheet strength since 2007. The assessment ranks the top-performing banks in each country by strength, an evaluation that is based on a belief that a strong bank demonstrates long-term profitability from its core businesses. The ranking is widely followed by investors, analysts, and the media as the leading source to assess the financial strength of commercial banks in the region.