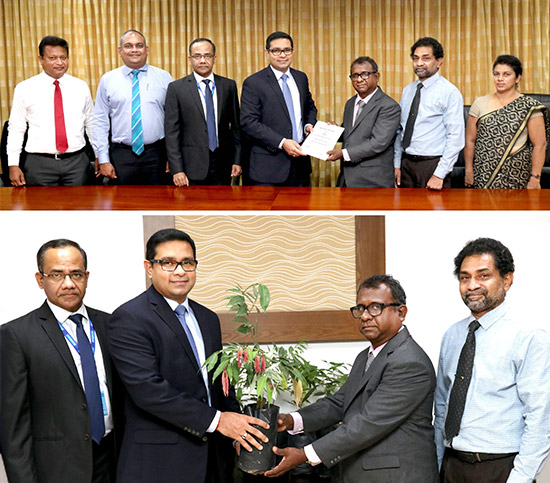 A 100-hectare swath of degraded habitat belonging to the Kandegama forest in the Dimbulagala range of the Polonnaruwa District is to be reforested by the Commercial Bank of Ceylon under the latest environment-linked commitment of Sri Lanka’s benchmark private bank.

The area, which is home to elephants, leopards, deer, and porcupine and is also climatically significant, is to be restored under this project in collaboration with the Forest Department.

Forests in the North-East area of the country have a catalytic effect on the North-East monsoon and the reforestation of Kandegama is expected to improve rainfall stability in the region in addition to paving the way for other environmental benefits including climate change mitigation, biodiversity conservation, and habitat improvement, the Bank said.

“We are determined to ensure that the current economic challenges do not side-track our commitments to chosen nationally-important causes,” Commercial Bank Managing Director/CEO Mr Sanath Manatunge said. “As the only Bank in Sri Lanka to achieve 100% carbon neutral status and as a Bank which is committed to preserve the environment, Commercial Bank is very pleased to join hands with Forests Department for this reforestation project. With this project, Commercial Bank continues its support to Sri Lanka’s efforts to increase its forest cover and conserve habitats.”

He noted that Sri Lanka has pledged to increase its forest cover up to 32% by 2030 under the 2015 Paris Agreement of the United Nations and the country also plans to restore 200,000 hectares of deforested and degraded forest by 2030 in response to the Bonn Challenge which seeks to bring 350 million hectares of landscapes into restoration, globally.

The Kandegama forest occupies an area of 600 hectares. The dominant vegetation of the forest is scrub and bushes such as ‘Hinguru’ and ‘Babila’ and invasive plants. Scattered stands of large trees such as ‘Madan,’‘Mayila’ and ‘Kon’ offer refuge to its wildlife.

The reforestation project funded by the Bank envisages the planting and maintaining of 62,500 seedlings of local species and extends to reducing the danger of forest fires by 95% by removing invasive flora such as ‘Mana’ and ‘Illuk’ grass that hinder the growth of other plants and are susceptible to forest fires during the dry season. This will also aid natural regeneration and control cattle grazing.

Funds provided by Commercial Bank will be used to conduct a land survey and map out the 100 ha of forest under the purview of the project, a study of its vegetation to understand the effects of other activities on species composition and density, the clearing of strips to the width of 5m and planting of seedlings, establishment of fire lines for fire control by removing ground vegetation up to a 10m strip around the plantation area to avoid external fires spreading to the forest land, fertilising and watering during prolonged drought periods, maintaining and monitoring the forest land and fire belt for a period of three years, and the performance of annual sample surveys.

The Bank’s CSR Trust also focuses on marine conservation under its environmental initiatives. Recent such initiatives of the Bank include support to the Koggala Mangrove Restoration and Conservation Project. The Bank has funded the planting of a belt of 2,000 mangrove plants and 750 mangrove associates around a little island in the Koggala Lake, along with 500 terrestrial plants on the island. Commercial Bank has also provided financial assistance to plant 1,000 mangrove trees along the Mannar coastal belt and to clean-up the beach area.

Sri Lanka’s first 100% carbon neutral bank, the first Sri Lankan bank to be listed among the Top 1000 Banks of the World and the only Sri Lankan bank to be so listed for 12 years consecutively, Commercial Bank operates a network of 268 branches and 940 automated machines in Sri Lanka. Commercial Bank is the largest lender to Sri Lanka’s SME sector and is a leader in digital innovation in the country’s Banking sector. The Bank’s overseas operations encompass Bangladesh, where the Bank operates 19 outlets; Myanmar, where it has a Microfinance company in Nay Pyi Taw; and the Maldives, where the Bank has a fully-fledged Tier I Bank with a majority stake.

ComBank engages with Sri Lankans in Singapore to promote business