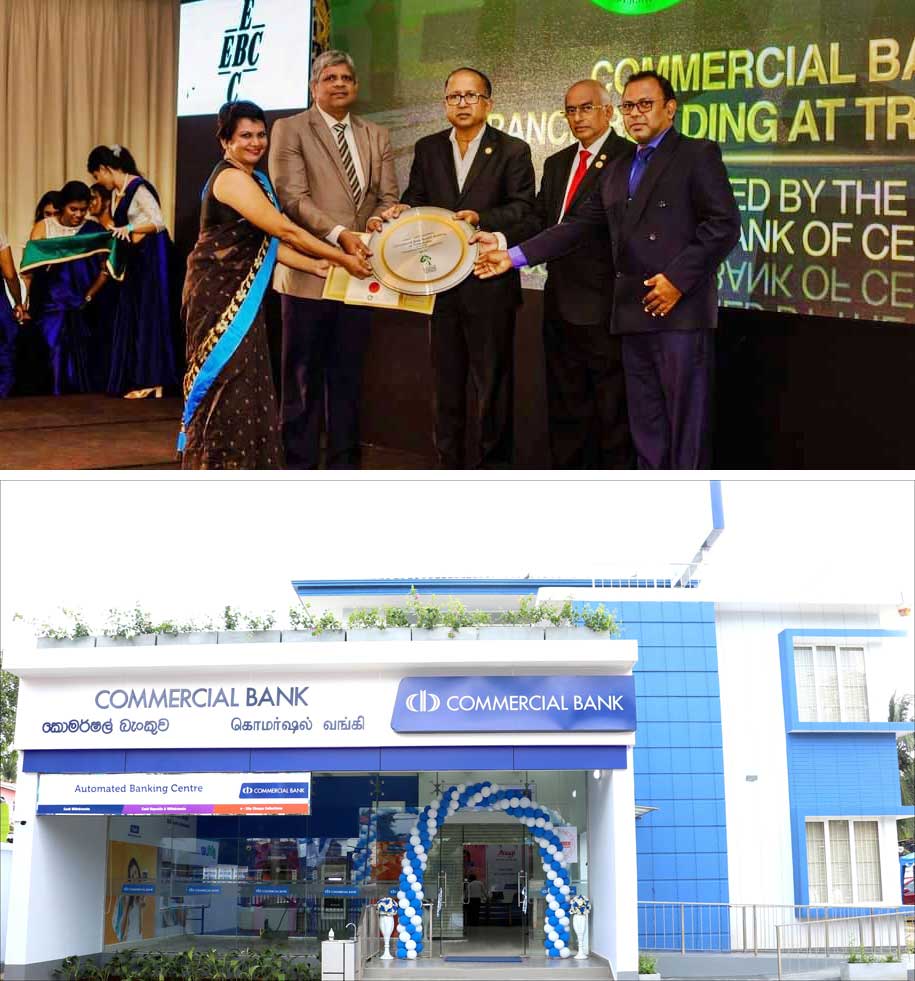 Commercial Bank’s Trincomalee branch was relocated to No 420, Court Road, Trincomalee, to a building that complies with the standards of the GREENSL® rating system developed by the GBCSL as a home-grown model applicable to Sri Lankan conditions.

The building is fitted with rooftop solar panels that generate a major percentage of the electricity required under a net-metering system, an overhead rainwater harvesting facility, a storm water control system, and its own sewage treatment plant that recycles sewage into water to irrigate the gardens. The building has achieved 30% energy saving compared to the American Society of Heating, Refrigerating and Air-Conditioning Engineers (ASHRAE) standard baseline, and consumes minimal potable water by eliminating the usage of potable water for irrigation and landscaping.

The Green Building Gold rating also recognises the building’s vertical greening feature, maximum use of natural light during daytime, and restoration of natural habitat. To further reduce energy consumption, it is equipped with energy-efficient air-conditioning and its garden lights are powered by dedicated independent solar panels. Green transportation solutions are also encouraged at the branch.

The Commercial Bank Trincomalee branch received this award at the 11th Annual Green Building Award Ceremony held at the Earl’s Regency Hotel in Kandy in December 2022.

Commercial Bank’s Green initiatives include lending to support Sustainable and Green operations, migrating customers to paperless banking, improving efficiency in the use of energy, water and other resources in its own operations and supporting community initiatives that help conserve habitats and the environment. A mangrove restoration project in Koggala and a marine turtle conservation initiative in Panama are further examples of the Bank’s commitment to environmental conservation.

The Bank pioneered a mandatory social and environmental screening process for its project lending activities and was the first bank in Sri Lanka to venture into Green Financing. It also revolutionised digital banking by introducing features in its ‘Flash’ mobile application to measure and offset customer impact on the environment.

The Green Building Council of Sri Lanka is a consensus-based not-for-profit organisation with diverse and integrated representation from all sectors of the property industry and academia. Established in 2009 as a joint effort of the professional institutions of architects, engineers, structural engineers, town planners, quantity surveyors, university academics, construction industry leaders, environmentalists and business leaders, the organisation’s aim is to transform the Sri Lankan construction industry with green building practices and to encourage it to fully adopt sustainability as the means by which the environment thrives, the economy prospers, and society grows.