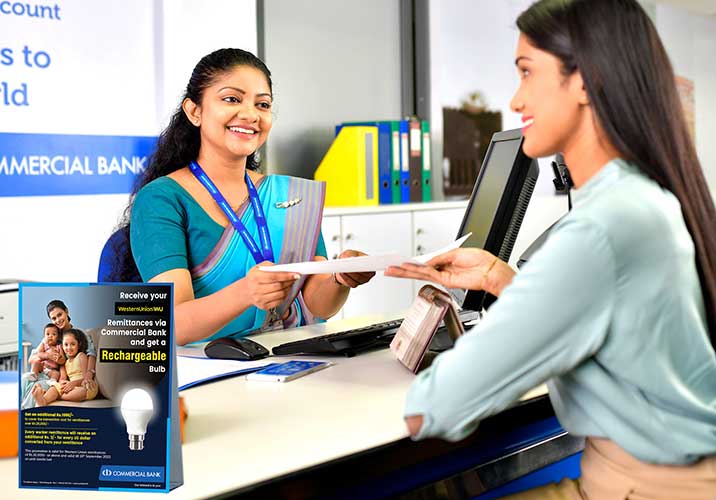 The Commercial Bank of Ceylon and leading money transfer operator Western Union are collaborating on a novel promotion that will reward recipients of remittances with a most timely and in-demand gift: a rechargeable LED light with every remittance worth Rs 10,000 or more, received until 15th September 2022 or until stocks last.

Western Union is a global leader in cross-border, cross-currency money movement, and is present in over 200 countries and territories worldwide with 525,000 agent locations. The Commercial Bank of Ceylon tied up with Western Union in 2019 to enable users of the service to receive money over the counter of a Bank branch from anywhere in the world, especially from the USA, Canada, parts of Europe and the Middle East which are popular destinations for remittances.

One of Commercial Bank’s key strengths in serving the remittance needs of customers is its island-wide network of 268 branches, many of which remain open on public, bank and mercantile holidays, and its network of 940 ATMs, which is the largest automated cash dispensing system owned by a single private bank in Sri Lanka. The Bank operates a dedicated customer support call centre for remittances and provides SMS alerts when a remittance is received and is ready to be paid out.

One of the most active players in the country in the field of remittances, Commercial Bank launched Sri Lanka’s first Remittance Card in 2016 complete with a cash advance loan facility against emergencies. The Bank has issued over 40,000 such cards to date.

To further cater to this segment, the Bank launched ‘ComBank RemitPlus’ in 2019 to enhance access to remittance-related information and services. It also operates 24/7 remittance processing units and has installed dedicated remittance counters at its main branches.

Commercial Bank is Sri Lanka’s first 100% carbon neutral bank, the first Sri Lankan bank to be listed among the Top 1000 Banks of the World and the only Sri Lankan bank to be so listed for 12 years consecutively. It is the largest lender to Sri Lanka’s SME sector and is a leader in digital innovation in the country’s Banking sector. The Bank’s overseas operations encompass Bangladesh, where the Bank operates 19 outlets; Myanmar, where it has a Microfinance company in Nay Pyi Taw; and the Maldives, where the Bank has a fully-fledged Tier I Bank with a majority stake.

ComBank launches ‘Forex Plus’ Foreign Currency FD scheme with interest rates of up to 9.5%

ComBank and CISCO help prepare over 2,000 students for careers in IT