ComBank offers ultimate convenience with all apps in one Aggregator App 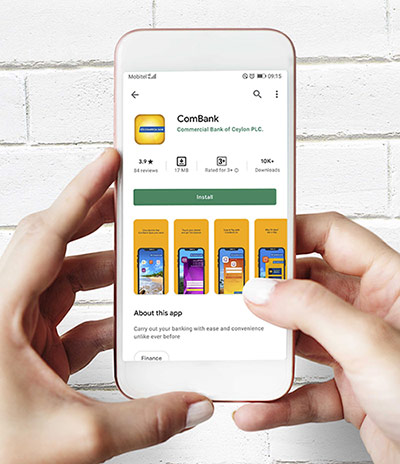 Access to and use of Commercial Bank of Ceylon’s multiple mobile banking apps has become even easier with the launch by the Bank of an Aggregator App that bundles them together as a single download.

The Aggregator can be found by iOS as well as Android users in the App Store and Google Play respectively by simply searching for ‘Commercial Bank,’ the Bank said.

The Aggregator app eliminates the requirement of operating through separate downloads of different apps launched by the Bank and simplifies the mobile banking experience of customers.

It currently enables customers to access five of the Bank’s core mobile applications: ‘ComBank Digital’, ComBank ePassbook, ComBank eSlip, ComBank Q+, and ComBank Remit Plus. The Bank said all mobile apps it offers will eventually be included, with new Apps to be launched being automatically updated on the Aggregator.

Commenting on the launch of the Aggregator App, Commercial Bank's Assistant General Manager Information Technology Mr Krishan Gamage said: “The Aggregator was identified as a necessity as the Bank’s offering of services through mobile Apps began to expand. We continue to focus on introducing more digital products and services to enhance access and versatility to match the lifestyle and requirements of the modern customer.”

Once the Aggregator App is downloaded, it prompts users to select one of Apps in the suite to complete their operation. If the selected App already exists on the user’s device, it will be launched instantly. Users can register for the apps that are relevant to them once downloaded through the App Aggregator.

ComBank Digital App is the integration of all its online and mobile banking channels on a single omni channel platform. The Bank’s digital banking channels including ComBank Digital, a highly secure, user-friendly and responsive web application catering to both retail and business users. While the ComBank Remit Plus App enables those who use the Bank’s remittance services to conveniently access remittance-related information and services, the ComBank eSlip App launched recently encourages paperless banking by facilitating cash and cheque deposits to current and savings accounts. ComBank Q+ is Sri Lanka’s first Quick Response (QR) based payment app launched under LANKAQR, while ComBank ePassbook provides access to details of savings, current, personal and business foreign currency accounts and Credit Card transactions on mobile devices. Commercial Bank was the first financial institution in Asia to launch the revolutionary ePassbook.

The first Sri Lankan Bank to be listed among the Top 1000 Banks of the World and the only Sri Lankan bank to be so listed for 10 years consecutively, Commercial Bank operates a network of 268 branches and 887 ATMs & CRMs in Sri Lanka.

Commercial Bank’s overseas operations encompass Bangladesh, where the Bank operates 19 outlets; Myanmar, where it has a Microfinance company in Nay Pyi Taw; and the Maldives, where the Bank has a fully-fledged Tier I Bank with a majority stake.