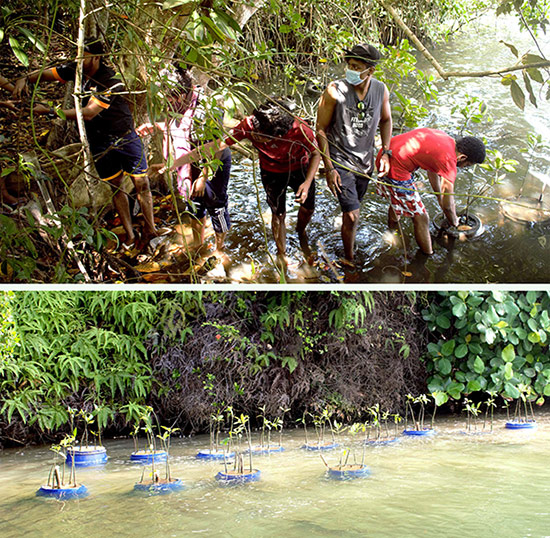 A protective boundary of 3,750 mangrove saplings is to be planted around Kath Duwa, an island in the Koggala Lake, with the continued support of the Commercial Bank of Ceylon to the ‘Koggala Mangrove Restoration and Conservation Project’ of Wildlife and Ocean Resource Conservation (WORC) of Sri Lanka.

Phase 2 of this project follows the immense success of the first phase, during which the Bank funded the planting of 2,000 mangrove plants, 750 mangrove associates and 500 terrestrial plants on this 13.5-acre island in Habaraduwa, which is situated close to ‘Madol Duwa,’ the island made famous by Martin Wickramasinghe’s novel of the same name. Phase 2 seeks to prevent marsh-edge erosion and will continue to utilise the barrel planting method which proved efficient in the first phase.

Ms. Patricia Scotland, Secretary General of the Commonwealth’s Blue Charter Action Group commended the project on her visit to Sri Lanka in 2019 and identified it as the best mangrove planting site in the country, the Bank said.  The first phase took two years to complete in conformity with conservation and habitat restoration methods, as promised by WORC.

The primary objective of the project is the restoration of the degraded ecosystem and to inspire a culture and community of environmental stewardship in the area.

Besides funding and monitoring the restoration project, Commercial Bank has also supported WORC to build partnerships with local communities, raise education and awareness, and collaborate with the organisation to identify sustainable livelihoods and business opportunities associated with the project and help kick start related activities. These contributions enable the Bank to play a part in the development of eco-tourism in the Koggala lagoon by supporting the lagoon community through reducing the impact of erosion and providing education on how to carry out activities in a more environmentally responsible manner.

The Koggala Lagoon has a surface area of approximately 7.27 km² and is largely fed by several connected streams. Thanks to its rich biodiversity and ecosystem, it is one of the main attractions for tourists visiting the Southern coast. It sustains a few scattered small islands with mangrove swamps along their shorelines. Human activities and high tide have caused severe lagoon bank erosion and brought about destruction to the ecosystem of mangroves in the past few decades. The ‘Koggala Mangrove Restoration and Conservation Project’ that is implemented in ‘Kath Duwa’ seeks to remedy part of this problem.

Mangroves are evergreen shrubs that grow in coastal saline or stagnant water. They are important because they have a large capacity to absorb carbon dioxide and other greenhouse gases and trap them in flooded soils. It has been found that the carbon dioxide storage capacity of a mangrove forest is more than twice that of a tropical rainforest. Mangrove ecosystems also play a vital role in buffering the force of the strong waves and in protecting the human inhabitations in addition to performing vital hydrological functions and serving as breeding grounds for fish and other marine species. Mangrove systems covering an area of 8000-12000ha are interspersed along the coastline of Sri Lanka.

The first Sri Lankan Bank to be listed among the Top 1000 Banks of the World and the only Sri Lankan bank to be so listed for 10 years consecutively, Commercial Bank operates a network of 268 branches and 887 ATMs in Sri Lanka.

Commercial Bank’s overseas operations encompass Bangladesh, where the Bank operates 19 outlets; Myanmar, where it has a Microfinance company in Nay Pyi Taw; and the Maldives, where the Bank has a fully-fledged Tier I Bank with a majority stake.

Volunteers at work at the Koggala mangrove restoration project supported by Commercial Bank.